Here at Newport Beach we live with the bears. They are born here, die here and they spend their spring eating here. This year there was a newborn cub and it was presented by its mother early in April. It spent its day nursing and running about with it’s mother discovering the joy of endless dandelions. The mother in an effort to feed herself and her cub was a nuisance to some humans. She killed and ate a duck, hung out in a few people’s gardens while the cub swung from the deck railing as if it were a playground gym. They were at home. A human was uncomfortable with the mother bear and she was killed leaving the cub orphaned. It wandered and wailed from the tree tops looking for the lost mother. Young cubs have very little ability to survive at this young age and we decided to connect with people who look after and help baby bears to be strong and smart enough to re-enter the wild. 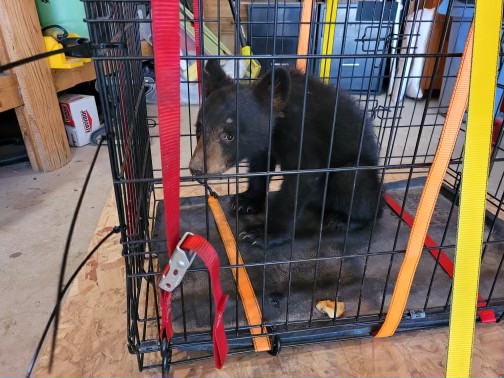 Yesterday after several emails and sharing of photos a lady from Hope BC showed up with a small cage and we proceeded to set food traps for the cub. Apples, honey and other goodies were spread about on its paths and today the cub was caged and put in the back of Kym’s car then driven to Kamloops where another human will take the cub to Smithers where it will live for the next year.

What a provincial effort to support and care for these bears. Here are some photos taken by Coral who looks after the grounds here at Newport Beach. Thanks Coral for catching the cub. Thanks Kymm for following up with all of the people who are committed to helping orphaned bears.

To live peacefully and without incident with bears, humans in community must create the boundaries that are necessary.

Keeping food garbage away from discovery, be firm with them when they come to close to your home. They are mostly curious and only interested finding the next best bit of food. Do not feed them. There is food enough and if not, they will wander where there is more.

When bears die here at Newport we bury them in the garden. During the Salmon season I save the guts and bones of the fish and lay them in the garden beds imagining I am feeding the spirit of the bear as well as creating amazing compost. Sometimes the Osprey or Eagles will drop a fish and I carefully tuck the carcass among the potatoes. We are hoping that we have done the right thing for this bear cub and that it will thrive in the care that has been offered. Thank you to everyone who made saving our bear cub possible.